Why eating fat won't make you fat, but sugar will 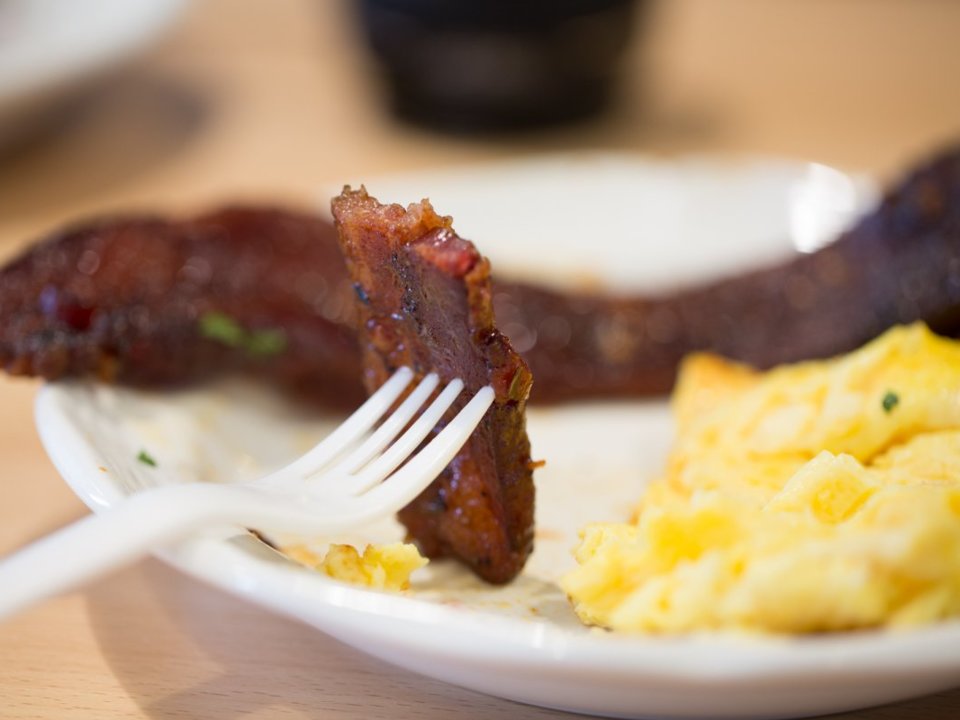 In the World Cup of food wars, sugar and fat are the playoff teams. Emerging science suggests that when eaten on its own, fat does not contribute to weight gain. Sugar, however, does. Increasingly alarmed by the sugar in our diets, scientists recommend cutting back and instead bringing back foods like creamy avocados and buttery salmon.

In the World Cup of food wars, sugar and fat are the playoff teams.

It makes intuitive sense that rich foods like creamy avocados or butter-drenched salmon would contribute to weight gain. Similarly, stacking up on sweet treats like sugary cereals and carb-heavy bagels can't be too great for your waistline, either.

But scientists are increasingly examining what happens inside our bodies when we regularly indulge in large amounts of either sugar or fat on their own.

In many parts of the world, the two ingredients are rarely eaten alone. Take doughnuts as an example. When the fresh carb-laden dough is deep-fried in oil, you get a classic combination of sugar and fat with a rich flavor and powerful mouthfeel that's tough to pass up.

But an increasing body of evidence is beginning to suggest that when eaten in isolation, fat doesn't contribute to weight gain. On the other hand, dozens of studies indicate that sugar alone is significantly tied to packing on pounds.

That's not all. A recent analysis found that drinking sugar-sweetened beverages like soda was associated with an increased risk of death, particularly among people who drank at least two a day.

Aaron Carroll, a professor of pediatrics at the Indiana University School of Medicine, describes the relationship between eating fat and weight gain this way in his book, "The Bad Food Bible: How and Why to Eat Sinfully."

"There is one thing we know about fats," he wrote. "Fat consumption does not cause weight gain. To the contrary, it might actually help us shed a few pounds."

That means that foods like buttery avocados, rich salmon, and savory nuts should probably have a place in your diet. If you banned them during the low-fat dieting craze of the 1990s, it's time to bring them back.

The proof is in the pudding

To nail down which ingredient — fat or sugar — is responsible for the biggest share of negative health outcomes, it helps to compare people who've eaten low-fat or low-carb diets.

Time and time again, studies that do this suggest that people who cut back on fats not only don't lose weight, they don't see other health benefits like a reduced risk of disease, either.

In contrast, people who eat lots of fats but curb their intake of refined carbs like sugary cereals, white bread, and white rice tend to see both of these gains.

In other words, the proof that sugar is linked with weight gain is in the pudding — quite literally.

For a large recent review of studies published in the journal The Lancet, scientists compared more than 135,000 people in 18 countries on either low-fat or low-carb diets. People on the low-fat diets were more likely to die from any cause; they were also at a greater risk of death from heart attacks and heart disease. By contrast, people on the low-carb plans had significantly lower risk of both of these outcomes.

The finding was so strong, the authors of the paper concluded, that "global dietary guidelines should be reconsidered," they wrote.

What happens when we trim the fat

That conclusion makes even more sense when we look at what happens when people try to trim the fat from their diets. In general, they just end up swapping rich or creamy ingredients with foods filled with sugar and carbs.

During an eight-year trial involving almost 50,000 women, scientists put roughly half on a low-fat diet. Not only did the low-fat dieters not lose much weight, if any, they also didn't see a decrease in the risk of breast cancer, colorectal cancer, or heart disease— outcomes commonly associated with a healthier eating plan.

Part of the problem lies in what happens with the rest of our diet when we suddenly try to eat only low-fat foods.

Most ready-to-eat items in the "low-fat" category are packed with sugar and carbs. Take any common cereal, granola bar, and yogurt and check the nutrition label: they're all high in sugar and carbs despite being low in fat.

Meanwhile, studies suggest that both of those ingredients are linked strongly with weight gain. A review of 50 studies on diet and weight gain published in the journal Food and Nutrition Research found that, on average, the more refined grains someone ate (like those from processed cereals and granola bars), the more weight they tended to gain over the study period.

So while "low-fat" products are all marketed as weight-loss tools, the reality is these products may contribute much more to weight gain than a fat-rich product with fewer refined carbs.

The take-home message here is that fat is a critical dietary ingredient, while sugar — despite being omnipresent in dozens of every day foods — is not. That means while it takes more work to curb your sugar intake, the available evidence suggests it's a more worthwhile fight than trimming the fat.