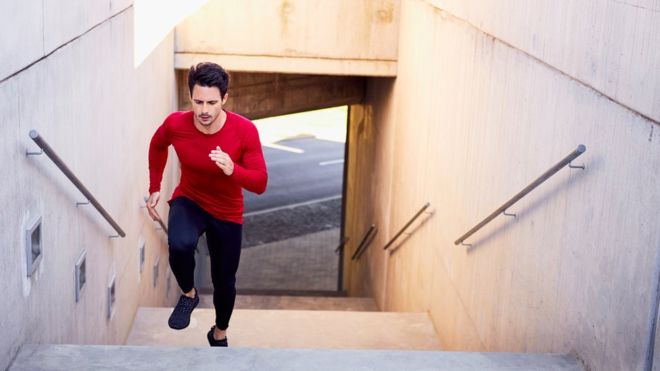 The research, published in the British Journal of Sports Medicine, analysed results from 36 earlier studies.

Although all the participants lost weight, those doing Hiit saw a 28.5% greater weight loss.

The researchers cautioned that Hiit may not be suitable for everyone.

"Hiit might increase the risk of injury and impose higher cardiovascular stress," they said.

What does the study say?

Researchers from the Federal University of Goias, Brazil, analysed data from 576 men and 522 women of varying levels of fitness.

These workouts were compared with longer continuous moderate intensity workouts, most of which were between 30 and 45 minutes. All participants exercised for at least four weeks.

Sprint interval training seemed to be particularly effective for weight loss, although researchers did caution that the wide variety of training programmes made it difficult to recommend one regime in particular.

The NHS currently recommends at least 150 minutes of moderate aerobic activity, such as cycling or brisk walking, every week.

Dr Niels Vollaard, a lecturer in health and exercise science at the University of Stirling, said the results were counterintuitive as most people burned more calories during longer moderate exercise.

"There are two possible explanations," he said.

"Firstly, Hiit may lead to greater energy expenditure after exercise - metabolism may be increased for up to a day following a Hiit session.

"Secondly, after a Hiit session, you may be less hungry.

"In our research, we have shown that appetite hormones are indeed affected.

"It is, however, not easy to study whether energy intake is reduced as a result of this in the longer term when following a Hiit routine, so at the moment we are still unsure exactly what the reason is."

Michael Mosley, who was introduced to Hiit seven years ago while making the BBC Horizon documentary The Truth about Exercise, said: "In 2012, I tested three lots of 20-second high intensity workouts on an exercise bike, three times a week.

"My insulin sensitivity improved by 24%.

"In the programme, we again saw very impressive results with younger, unfit people.

"The biggest problem with exercise is compensatory eating and relaxing afterwards.

"People go on a treadmill for 30 minutes, burn around 120 calories, then lie around and reward themselves with a muffin.

"The theory with Hiit seems to be that it suppresses your appetite and targets the visceral fat in your gut.

"It's not the calories you burn that matter - it's what you do next."

This article first appeared on BBC.