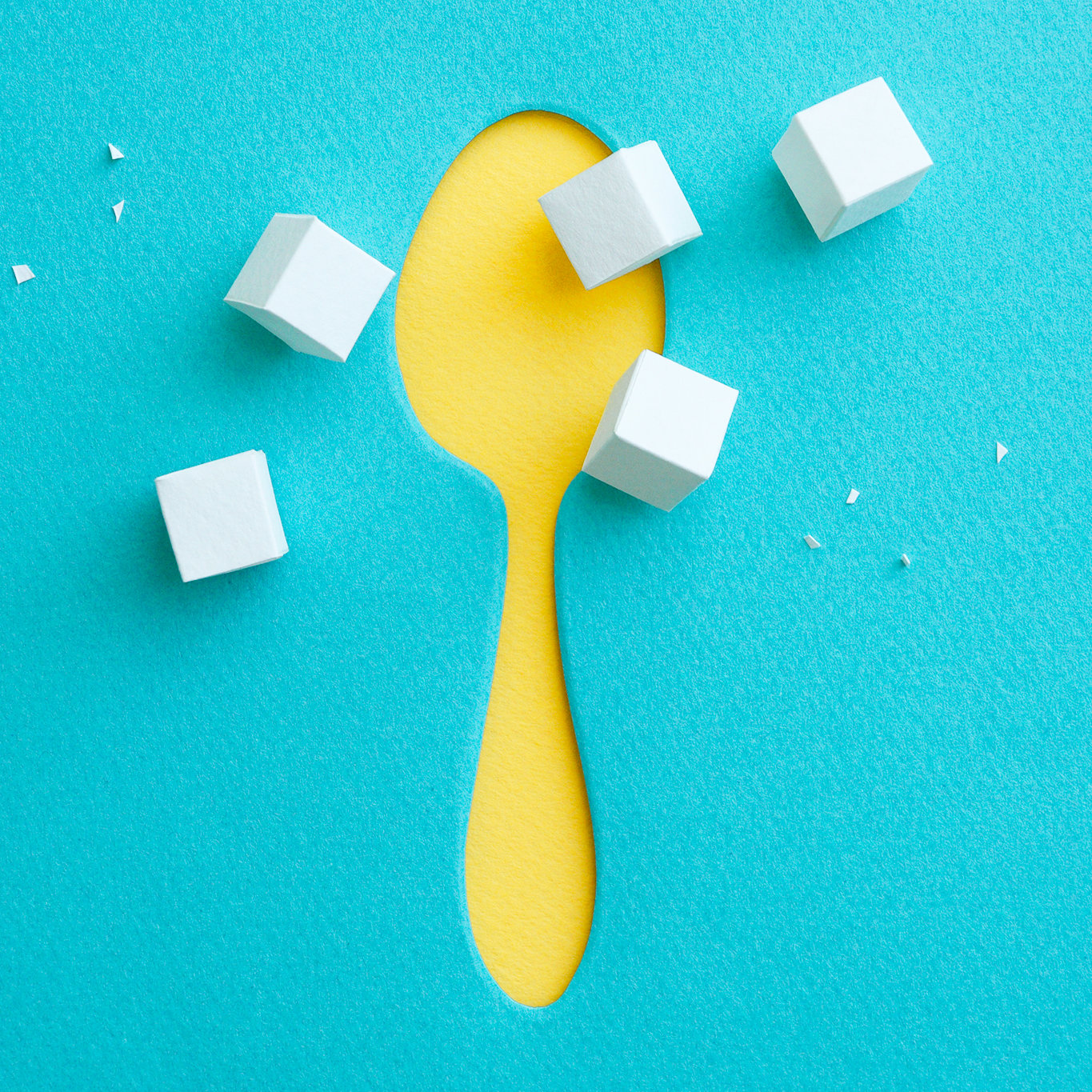 One of the best things you can do for your health is to cut back on foods with added sugar. Our 7-Day Sugar Challenge will show you how.

While you might think you’re not eating much sugar, chances are you’re eating a lot more than you realize. Added sugar lurks in nearly 70 percent of packaged foods and is found in breads, health foods, snacks, yogurts, most breakfast foods and sauces. The average American eats about 17 teaspoons of added sugar a day (not counting the sugars that occur naturally in foods like fruit or dairy products). That’s about double the recommended limit for men (nine teaspoons) and triple the limit for women (six teaspoons). For children, the limit should be about three teaspoons of added sugar and no more than six, depending on age and caloric needs.

Cutting added sugar isn’t about dieting and deprivation, and you don’t have to count calories or cut fat. In fact, when you stop eating foods with added sugar, you’ll replace them with foods that taste even better. And yes, you can still have dessert.

Whether you are thin or fat, you can benefit by reducing the sugar in your diet. “It’s not about being obese, it has to do with metabolic health,” says Dr. Robert Lustig, professor of pediatric endocrinology at the University of California, San Francisco, and one of the first to raise the alarm about the health risks of added sugar. (His 90-minute lecture called Sugar: The Bitter Truth has been viewed more than nine million times since 2009.)

“Sugar turns on the aging programs in your body,” Dr. Lustig says. “The more sugar you eat, the faster you age.”

A number of health authorities, ranging from the World Health Organization to the Office of Disease Prevention and Health Promotion, which issues national dietary guidelines for Americans, agree that cutting back on added sugars is a good idea. And critics like Dr. Lustig believe that the case against sugar is as strong as the case against smoking or excess alcohol. (These recommendations have come under attack by groups with ties to the food industry.)

Yet many of us who wouldn’t dream of smoking or getting drunk on a daily basis might be unknowingly undermining our health by eating too much sugar.

Many scientists now believe that added sugar is a main culprit in the obesity epidemic, but normal-weight people can suffer the same health problems associated with too much sugar. A 15-year study found that eating high amounts of added sugar doubles the risk of heart disease, even for people who aren’t overweight. Added sugar has also been implicated in an increased risk for Type 2 diabetes, cancer, stroke and even Alzheimer’s disease.

And too much added sugar in your diet can damage your liver, similarly to the way that alcohol can. About a third of American adults and 13 percent of children have nonalcoholic fatty liver disease, a condition linked to added sugar consumption that is on the rise and that can progress to serious, even deadly, liver illness.

We’ve all seen the beer belly associated with drinking too much alcohol. Consuming too much added sugar can lead to a similar condition called “sugar belly,” in which your waist is bigger than your hips. Sugar belly can arise when the liver repeatedly detects more fructose, a form of sugar found in fruits that is also added to many processed foods, than our bodies can use. To deal with it, the liver breaks down the extra fructose and changes it to fat globules, which are then exported into the bloodstream and deposited around your internal organs and your midsection.

But isn’t sugar a natural food? That’s a counter argument often promoted by the sugar industry, but there is nothing natural about the way most of us eat added sugar. When you eat a strawberry or other fruit, you are eating fructose in its natural state, and it comes with a number of micronutrients plus fiber, which slows absorption and the rate at which sugar enters your bloodstream. So yes, it’s O.K. to eat fruit! Your body can handle fructose when it’s eaten as whole fruit.

But the fructose found in ultraprocessed foods and beverages is concentrated from corn, beets and sugar cane, and much or all of the fiber and nutrients have been removed. Without the fiber to slow it down, your body gets a big dose of fructose that can wreak havoc.

High consumption of processed fructose also can dull your body’s reaction to the brain hormone leptin, which is a natural appetite suppressant. A condition called “leptin resistance” can develop among high-sugar eaters, and the brain stops getting the message to stop eating, leading to weight gain.

And increasingly, the scientific community is acknowledging the addictive nature of the fructose in processed foods and beverages. Brain scan studies show that fructose affects the dopamine system, a messenger center in the brain that controls how we experience pleasure. Eating lots of added sugar can create changes in the brain similar to those found in people who are addicted to cocaine and alcohol, and it’s one reason so many of us find ourselves craving sweets.

Cutting sugar is a simple concept, but it can be challenging when a majority of foods available in supermarkets contain added sugar. Gary Taubes, author of “The Case Against Sugar” and an advocate of low-carb eating, scoffs at the food industry recommendation that added sugars be consumed in moderation. Mr. Taubes has built a career touting the deleterious effects of processed food and added sugar. Just a few bites of a food like banana bread, he says, leave him wanting more.

“If I start to allow sugars into my life, there is a slippery slope,” he says. “I think for many people, getting control of their sugar habit is the most important thing they can do for their health. If they can’t do it through abstinence, then mostly-abstinence is a good thing to achieve.”

So how do you start reducing the added sugar in your diet? A good first step is to take our 7-day Sugar Challenge, which will deliver a new strategy each day for cutting added sugar. By the end of the week, you will have adopted several new healthful habits that can put you well on the way to cutting added sugar from your diet for good.

To start, it’s a good idea to cut sugar out of breakfast, which tends to be the sweetest meal of the day. Cutting sugary beverages and eating whole foods rather than packaged foods makes a big dent in your sugar consumption. If you crave dessert, eat fruit instead (skip the grapes, which are mostly sugar), and it’s best to limit other types of dessert to once a week.

And when you read food labels, look for added sugar in disguise. “One should keep in mind that added sugars go by many different names like ‘brown sugar,’ ‘beet sugar,’ ‘agave nectar’ and ‘honey,’” says Dr. Frank Hu, chair of the department of nutrition at the Harvard T.H. Chan School of Public Health. “But don’t be fooled by these names, because they are all added sugars with similar metabolic effects and extra calories.”

Cutting added sugar isn’t easy. During the first five days of no added sugar, you will probably experience cravings for sweets. And be warned that studies show that many of us are particularly vulnerable to craving sugary snacks in the evening.

But stick with it, and soon the cravings will fade. You’ll start to feel more energetic, more focused and less irritable. You might even lose weight.

While our challenge lasts for seven days, the goal is to change your diet and stick with your new habits for a lifetime of healthful eating. After just 10 days of cutting added sugar, one important study of overweight children has shown improvements in numerous metabolic markers, including blood pressure, cholesterol and blood sugar.

Note that cutting added sugar doesn’t mean you’ll be eliminating sweet foods from your life entirely. If you adopt a standard daily diet of whole foods with no added sugar, you will still be ingesting about 10 percent of your calories from natural sugars. And once you’ve got added sugar under control, the occasional treat of chocolate or dessert won’t derail you. Dr. Lustig recommends three weeks of no added sugar to get your brain’s dopamine system back to normal.

“Then you can introduce something back in,” Dr. Lustig says. “But it’s got to be under your control, not the food industry’s control.”

This article first appeared on The New York Times.